At the movies: I Am The Doorway.

I AM THE DOORWAY

Stephen King’s short stories have always been his finest achievement- timeless and unrestrained portraits of humanity in crisis that remain as unsettling and effective forty years down the road as when they were first published. There’s a power in those works that works on a level different from his rightfully acclaimed legacy of novels and their many adaptations across countless media. But anyone with memories of the cover of the mass-market paperback of Night Shift will remember its key image- a hand, covered in bandages and eyes. I Am The Doorway, which lent the collection that striking image, was Lovecraftian SciFi of the highest order, so rich in ideas and tableaux that no one attempted to take it into the realm of the visual. But now, from the Czech Republic, a filmmaker has pulled off the cinematic equivalent of alchemy, taking that story and telling it visually without dialogue and with a subjective camera. In fifteen minutes, Director Robin Kasparik delivers artful cosmic horror, creative mise-en-scene, and the finest Stephen King adaptation in years. Be ready for a bold new voice in horror and science fiction.

At the movies: BLOODLANDS. 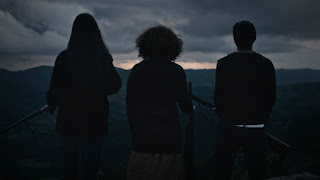 The idea has been with us since humanity first forged the bonds of society, that we must use the threat of further violence to ward off the initial descent into violence, reaching its apotheosis with the Mutually Assured Destruction detente of the Cold War. Albania’s history of blood feuds may reach the same, final result as the MAD doctrine, but its canvas is wider, and of a much more deliberate and patient pace. Rather than a fell swoop, the blood feud is a grind that stretches across generations, plucking individuals one at a time, back and forth until The Why becomes a mystery, a tale told and retold, shifting across decades. The fickle and impetuous hearts of man are dangerous enough on their own. So when the shtriga (a witch birthed from the anger of a wronged mother) becomes involved, that spark of violence becomes an inferno.

BLOODLANDS is a tale of two families; one, a foursome of meat merchants, the other a ragtag group of mountain survivalists orbiting the shtriga. The father Skender is driven by pride and doubt, a patriarch all too aware that his tiny empire is crumbling from within. His pride is both the instigating event for a great reckoning and its explosive fruition, helped along by what could be the ancient magic of the witch of the mountains or might just as easily be a patient hand working on a canvas spanning a century. Multihyphenate Steven Kastrissios has crafted a visceral and rapturously beautiful film, a story that has a grand, mythic resonance that could have inspired Shakespearean drama just as easily as it could be a modern tale of horror and strife. The standout performance is Suela Bako as Skender’s wife Shprisa, a pragmatic woman capable of balancing a brusque, sometimes loutish husband alongside the ancient secrets of rites that have been hidden from the prying eyes of the modern.

Violent (including some upsetting but not gratuitous footage from an abbatoir), visionary, visually distinctive, and suffused with a sense of history moving inexorably through our modern sense of stability and civilization, BLOODLANDS is a remarkable film that should delight genre fans and arthouse patrons equally. It haunts the viewer long after it ends. Its reach is beyond the now, and it is patient.
Posted by INTERFACE 2037 at 02:22 No comments:

At the movies: A Closer Walk With Thee. 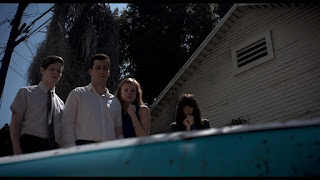 A CLOSER WALK WITH THEE'

Four kids, more than teens but flailing toward adulthood with uncertain grasp, have set up a small evangelical outreach congregation in a sketchy neighborhood where they’re in over their heads. Tensions are high, and it feels like nobody’s working toward the same set of specific objectives. Fortunately, for a little while, the general purpose of outreach is keeping things afloat. Until desire begins to rear both of its heads, and that ramshackle balance is shattered by the collision of fear, lust, rage, doubt, pagan gang activity, and Christian rock.


This film shocked me. And I don't shock easily. As a cautionary tale for evangelicals and gay boys, as an origin story, as an unconventional possession narrative, as the next BDSM scene you're going to try out when no one is looking, and as a horror film where horror means something different to each of the characters, A CLOSER WALK WITH THEE is a special film, as well as a queer film, a lacerating character study, and above all a sensitive, resonant, and viscerally shocking arrival on the genre film scene. I hope you enjoy it. And if you can't enjoy it, I hope it upsets you. And if it can't upset you, then I hope it makes you have Mulholland Drive-style weird dreams where you have to come to terms with the absolute moral truth of yourself.
Posted by INTERFACE 2037 at 02:21 No comments:

At the movies: SEQUENCE BREAK. 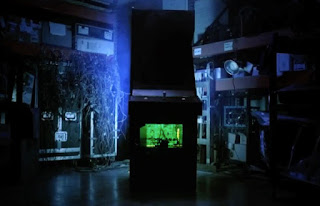 Kinky, ghoulish, serrated, trippy as fuck, and kind of sweet, Sequence Break is yet another in 2017’s remarkable array of debut features. Imagine the narrative mechanics of The Last Starfighter, but told with the visceral grace of one of David Lynch’s psychogenic fugues.


You wouldn’t think a film this expert in the particulars of nonconsensual melting would elicit such an emotional catharsis, but here we are... Written and directed by Graham Skipper, whom you may know as the moral center of the Begoverse, or from his leading turn in last year’s haunted VHS board game epic Beyond The Gates, Sequence Break is like something distilled from the hippocampus (the part of the brain where nightmares and fever dreams live). It’s rooted in situations that even those poor souls with no affection for classic arcade games can relate to- in a way, the film’s transformative horror/hope could insinuate itself into a near infinite number of situations with creative people and the fields in which they hone their craft.


But arcade tech places us in a visual space where we understand the capabilities of The Now and The Then. And then it takes us further. Into The Beyond, which is a phrase I use both in its literal sense, completing the triplet, and as a shout-out to Lucio Fulci’s 1981 apocalypse of mortified flesh and inescapable dread. Skipper knows his shit when it comes to horror and SciFi, and he never goes for ‘spot the reference’ jukeboxery. But he’s also aiming wider than one might expect- Sequence Break is also one of the best weirdo romances since The Lobster, and it’s not inconceivable that we might see its title popping up as dating app profile slang in the not too distant future.


Oz (Chase Williamson, who could have stopped making movies after John Dies At the End and would still be a damn treasure) is the guy who fixes arcade games. It’s neither social worker nor 24-hour veterinarian, but it’s a job that is necessary. He’s a little weird, and routine-based, but that’s how the world is when you’re not working the traditional 9-to-5. He may well never meet the folk he brings joy to a quarter at a time, but he’s doing honest work that’s nothing to be ashamed about. And unfortunately, in a situation that’s becoming all too familiar to folk who have those small-scale artisan jobs, the economy just isn’t as supportive to peripheral artists. So at this moment, into the middle of this crisis, comes Tess (Fabianne Therese, who eschews quirkiness for a pragmatism grounded equally in agency and fun). She’s a writer, though that’s currently taken a backseat to tempcraft. So she’s also biding her time, cultivating an appreciation for gin and for lanky, scruffy dudes – like Oz.


The two have a casual, unforced chemistry, and they’re as cute together as they are funny. Also, Tess introduces the color blue to Oz’s life. When they first really talk to one another, her presence brings the blue light of a bar, a shade that was always there, into sharp contrast in the redscape of how we (and Oz) have been seeing things. Williamson delivers a deeply sensitive performance, bringing a lot across without ever telegraphing the journey he’s on. His Oz is the kind of guy who keeps his cost of living down. He’s not trying to rock the boat, or make a big score, or fuck anybody over. “You’re an antique,” she says to him, and he confirms that others have said the same thing. But he’s not an idiot manchild. He’s not anybody’s stereotype. But then there’s the matter of the mysterious circuit board that shows up at the arcade. It’s when Oz hooks it up to one of the nonfunctioning cabinets at the office that things start changing.


Sequence Break shares certain of its fundamental elements with Cronenberg’s Videodrome, but its New Flesh rejects the linear hierarchy of Dr. O’Blivion’s mutagenic signal. Its White Eye is the Vajrayana of body horror, using technology as a means of transformation that philosophically feels like a biochemical remix. We repeat, we revise, we reorient. As videogame movies go, Sequence Break sits right up there near the top with Cronenberg’s eXistenZ. It gets at the aspirational nature and expansive possibilities of games, but rather than text-block backstorying the viewer into oblivion right after the opening credits, it goes immersive. Its edges don’t fit in neat spaces, conveying the audience from point A to B and so forth.


It rewards repeat viewings in the way that ‘70s and ‘80s sagas did, letting the viewer determine where the parts fit after spending some time with the story. In its vibrant color schemes and moody electronic score (imagine Vangelis and Tangerine Dream getting all pilled out in 1983 and having a no holds barred synth fight), it’s a versatile beast of a film, acquainted with the worlds of the analogue and the digital. And while Sequence Break isn’t necessarily the film you’d throw on at a party (it’s a measured, moody, meaningful film, not made for casual or indifferent viewing), it’s the horror/SciFi film you share with the ones who matter. If I had to program it in the center of a Triple Feature, I would put it between Lord of Illusions and Beyond The Black Rainbow. You know, for when you have to tear off that scab that we call reality every now and then.
Posted by INTERFACE 2037 at 02:35 No comments:

Catching Up with Jason Shawhan.

A review of PERSONAL SHOPPER.

A review of PREVENGE.

A review of KONG: SKULL ISLAND.

A review of GET OUT.

A review of XX.

A review of FIFTY SHADES DARKER.

A review of JULIETA.

A review of SPLIT.

My interview with PAUL VERHOEVEN, which was lifechangingly awesome.
Posted by INTERFACE 2037 at 02:29 No comments: