At the movies: The Black Hole.

A 35mm print of The Black Hole in Nashville, and I will not be able to see it. I've seen this film probably seventy or so times, and it still remains dear to me despite its flaws. I get to talk about it briefly online at the Scene, and if you'd like to know more, you can read a review I wrote of the film in 2001.
Posted by INTERFACE 2037 at 17:25 No comments: 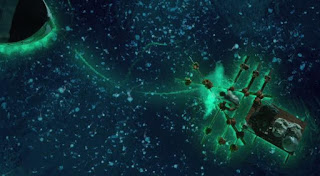 Life of Pi 3D was the opening night film of the 2012 New York Film Festival. For its press screening (which happened early that morning), a bunch of us waited in the torrential downpour. At the time, I complained, because I could be funny about it. But the film was transcendent and fairly moving, and some of the best 3D I'd ever seen. So here's the talk with Ang Lee from after it- it was a fun press conference, and Lee (in addition to being an NYU alum, so you know I have his back, he's a solid dude with amazing visual imagination) was a lot of fun. 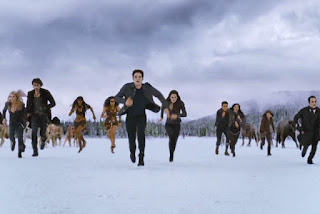 Twilight 4.2 happened to me recently. If you'd like my thoughts on the previous films in the series to prepare yourself, you can find them here, here, and here. There's no working link to my New Moon review, so I have reproduced it below for the sake of completism. Regardless, Breaking Dawn Part 2 is kind of amazing. Read along for the goods...

Also, I'd like to point out something that I've noticed about what I've written about the Twilight experience. I've been judgy and a little off-the-cuff with these movies, but I've also had a lot of fun writing about them (even the time I got hit in the face with a New Moon t-shirt from one of those t-shirt guns like what killed Maude Flanders). As far as keeping up a tradition with a franchise I wasn't a huge fan of, these films were way preferable to the Saw movies...

So free-thinking High School loner Bella and sparkly vampire Edward are together, moping magnificently throughout their Pacific Northwest High School. Then a papercut turns everything upside down, and the Cullens disappear, leaving our girl Bella a depressive adrenaline junkie with a journal full of flowery sadness. Fortunately, lurking in the shadows is another supernatural dreamboat, this time newly-buff werewolf Jacob, who wants to give his all to make sure that Bella is happy and safe.

The only supernatural force, it seems, that isn't devoting itself to protecting Bella: the Volturi. The Volturi are a mysterious clan of vampires who rule from their mini-fortress in Italy. They maintain absolute secrecy as to the existence of their own kind, though they apparently feast on packs of tourists by the busfull. And it's to them Edward has gone, in order to commit a complicated form of ritualized suicide. Because he thinks Bella is dead, and, despite being 109 years old, he's a guy who doesn't really know what it is that he wants.

That old Three's Company paradox of a labyrinthine plot that could be straightened out if people talked directly to one another... Well, New Moon has that by the fistful. And judging by the response of the audience at the pre-opening night screening I attended, New Moon also has puppies and expensive Belgian chocolate and the finest of champagnes, because that's the kind of response it got.

I can't hate: this is certainly more consistent and visually interesting than its predecessor, and its overwrought silliness is infectious, like a Smiths B-side or mononucleisis. Check your brain at the door and enjoy...
Posted by INTERFACE 2037 at 01:22 No comments:

At the movies: Holy Motors.

At the movies: The Paperboy. 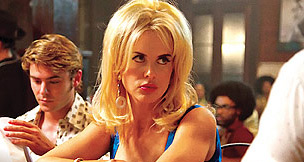 The most infamous film of this year's festival season finally reaches Nashville. Do not pass Go. Do not collect $200. Getcher $8.75 and get a ticket, because this one is everything you could want out of socially conscious exposes and trashy exploitation.
Posted by INTERFACE 2037 at 11:26 No comments:

At the movies: Flight.

Here are some thoughts on the new Denzel film. I had a fairly problematic response, but I know many people who loved and were moved by the film (and many who called it bullshit). Give a read, let me know your thoughts.
Posted by INTERFACE 2037 at 11:14 No comments: