At the movies: Shutter Island.

An isolated mental institution off the coast of Massachusetts.

Surrounded by armed guards, jagged coastline, freezing cold ocean, and an electrified perimeter. And from this place, a prisoner has escaped.

So it’s up to Federal Marshal Teddy Daniels (Leonardo DiCaprio) and his partner Chuck (national treasure Mark Ruffalo) to try and get to the bottom of things. And what they find is a majestic conspiracy that springs from a world where madness doesn’t cause atrocity, but rather comes from it. It’s a hard-hittin’ 50s-style melodrama as only a devoted cinemaphile like Martin Scorsese could make it, and it’s
near-magical.

You know how Casino isn’t as consistent a film as Goodfellas, but it has that mad visceral emotional kick to it that makes it into a wrenching and indelible experience? Well, Shutter Island is like that.

Allow me, for just a moment, to sing the praises of Patricia Clarkson.

Conjured as if from fire itself, she is but one of the many one-scene wonders in the film, as if Scorsese assembled his supporting cast like he was gearing up for the All-Star Game. But Clarkson is like the incarnation of righteous anger in this film, and I like the way she tackles her role. Similarly, you find phenomenal work from Ted Levine, Jackie Earle Haley, and a near-unrecognizable Elias Koteas, each of whom serve as a piece of the puzzle.

And Shutter Island is a puzzle film, just not the kind that the studio would like you to think. Not the kind that we’ve seen gain ascendance over the past decade. This isn’t like The Sixth Sense or Memento- it isn’t a contest. In fact, the earlier you figure out the shocking twist, the better. Because that’s not what the film is about. It’s the kind of operatic dive into the infrastructure of guilt that Martin Scorsese does better than any other American filmmaker, and he continues to do so with style and class.

Also, the end credits music, a blend of Dinah Washington's "This Bitter Earth" and composer Max Richter's "On The Subject of Daylight," is absolutely majestic- the finest film music experience I've had so far this year.

At the movies: The White Ribbon (Das WeiBe Band).

A series of mysterious accidents plague a small village in pre-World War I Germany. Starting with a horseriding accident, then escalating to vandalism, torture, child-beating, mysterious disappearances, and finally murder, we observe the thinly-veiled structures of civilized society and how easily they are undone.

Authorities are absolute, and hierarchies are inescapable, even in the smallest groups. And what of the children? Could these youths, the picture of Aryan innocence, be concealing something sinister behind their forced smiles and quizzical looks?

A nominee for the Best Foreign Language Film and Best Cinematography Oscars as well as the winner of the Palme d'Or at the 2009 Cannes Film Festival, The White Ribbon has been wrangling heaps of attention for its portrayal of the rise of German fascism as well as its unique look (black-and-white, officially, but much more interested in the palette of grey- naturally- that comes about from color photography digitally desaturated) and its central mystery-without-an-answer.

As an allegory about the rise of fascism, The White Ribbon is a bit too obvious and enamored of its own deliberateness. Writer/Director Michael Haneke (Funny Games, Caché) can't get past being the stern taskmaster one expects from his body of work (only his masterpieces Time of the Wolf and Code Unknown escape this syndrome), and as such, everything seems far too exacting on the audience. But as an arthouse take on the themes of genre stalwart Children of the Corn, it's pretty enjoyable.

There's a sizable audience for films where Prussian frustration and Protestant repression get dumped on and beaten into the next generation of youth, and the steady hand and keen eye of Haneke deliver exactly that in the most steely and ruthless manner possible.
Posted by INTERFACE 2037 at 17:27 No comments:

At the movies: The Last Station.

Oscar nominations do a lot to increase a film's profile, and it's on the strength of the acting (and the Academy Award nominations for it) that this film has catapulted itself into public awareness. This could just as easily have been a Movie of the Week or cable network effort, and as such it might have swept the Emmys.

But the reason why everyone is talking about this film is Helen Mirren. Always fun and sometimes quite genius, here she rules the screen like a queen, speaking sweetly, seducing her husband all over again, plotting, fixing problems, and tearfully crawling around on the ground like Patti LaBelle. It's a magnificent turn.

Celebrated author Leo Tolstoy (Christopher Plummer) in the early twentieth century had become the voice of a movement, one of thought, social action, and altruism. His beloved wife, the Countess Sofya (Helen Mirren, rightfully deserving of her Oscar nomination), finds herself at odds with her husband over his many acolytes and his plans to give away his copyrights to the people. Into their midst comes Valentin (James McAvoy, as always the go-to guy for classy/sexy British audience surrogates), initially working as a spy for Tolstoy's right hand man Chertkoff (Paul Giamatti, hissably vicious), but eventually finding things a bit more complicated after getting to know the Tolstoys a bit better.

Anyone coming to this film to learn about Tolstoy's ideologies in depth will be disappointed. The plot essentially distills down to intrigue and deception over copyright and celibacy, so thankfully the cast step in to amp up the drama to soap opera levels- which is a good thing. Mirren is pure gold here, and Plummer underplays nicely to contrast her. The two are believable as a longtime couple, and the supporting cast fulfills its duties efficiently. Even if the script weren't so firmly stacked in favor of Mirren's Sofya, she would have you won over by the end, anyway.
Posted by INTERFACE 2037 at 17:25 No comments:

At the movies: The Wolf Man.

Visually stunning and completely overwrought, Joe Johnston's take on the classic tale of lycanthropy and the animal nature of man gets slightly more right than it does wrong, and that makes for a mildly entertaining film. Watching it, though, you can't help but think how much better it could have been.

Benicio del Toro, as the troubled Larry Talbot, keeps things internal and close to his chest, which is an odd choice for a movie where swarthy guys turn into wolves. More successful is Anthony Hopkins, who positively cackles his way through the proceedings with an appropriately jaded and bloodthirsty brio. But I must confess my annoyance with a film that would cast Geraldine Chaplin as a Gypsy fortuneteller and then give her two minutes of screentime.

The effects are exceptional for the most part, though the computer generated imagery works much better in crafting foggy atmosphere and murky Britishry than it does for the big transformation scenes. A little humor and some more for the delightfully moody Hugo Weaving to do would have improved things exponentially, but as it is, The Wolf Man is a bloody buffet for those who enjoy their bloodlettings in as classy a fashion as possible.

It's an ephemeral experience, and what endures is a testament to exceptional production design and mood.
Posted by INTERFACE 2037 at 17:24 No comments:

Good for you, QT.

This is the kind of thing that brings joy to my heart.
Posted by INTERFACE 2037 at 22:28 No comments: 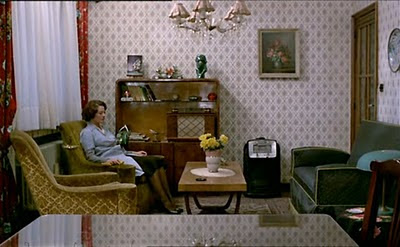 Jeanne (Delphine Seyrig, whom you may remember from Last Year at Marienbad or The Discreet Charm of the Bourgeoisie) is a widow. She is a mother, a cook, a babysitter, and an occasional prostitute. Her life is built in the security of routine and deliberation.

Her story is not the story of all women; but in being the story of one Belgian woman, it approaches the universal. This is a film about time, and truth, and desperation. It exacts a price, this film, but leaves the viewer with the sense that they have indeed spent some time living the life of another.

Making its Nashville debut at the Belcourt, Jeanne Dielman… is a landmark of experimental cinema. Director Chantal Akerman here makes extensive use of long takes with locked-off camera, and the end result has been confounding and evolving viewers for thirty-five years. It is in direct opposition to the philosophies of modern cinema that hold that if a meal appears on screen, then we can infer its creation and proceed accordingly.

There is no inference in this world- we experience it all.

This isn’t a film for everyone, but it is a film meant for everyone. Regardless of your own life experience, there is no one who can’t understand the enervating securities of routine and habit. A job you might be stuck in. A family in whose gears you try and live. A relationship that makes the act of living into a placeholder.

We’ve all of us lived parts of our lives in wrenching real-time, and Jeanne Dielman presents it with neither hesitation nor transcendence. We live in its space.

If there's any complaint to be made about the film, it's that one cannot experience it as the breakthrough it was in its initial release. So much of its visual and structural language has since been assimilated and absorbed by other filmmakers and their films, it's hard to see Jeanne as the innovator that it is.

Still, it is such an overwhelming experience, I cannot help but recommend it to anyone who considers moviegoer their religious affiliation.
Posted by INTERFACE 2037 at 05:06 No comments:

Two things that make me feel better about life.

One from the animal kingdom, the other from the world of pop music.