At the movies: Escape from Tomorrow. 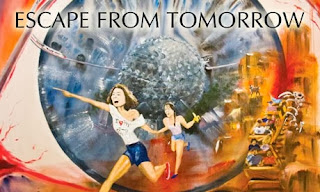 Though I think I still prefer the Sundance cut a little more, I still love Escape from Tomorrow, and I urge anyone who might be reading this to check out my review and then check out the film. Or, if you're an adventurous type, just check out the film first. If you have pasts (or presents) with theme park drama in them, it will be all the more resonant for you.
Posted by INTERFACE 2037 at 15:12 No comments:

At the movies: The 51st New York Film Festival

This year's 51st New York Film Festival was a grand array of new and challenging work from all over the planet. I was able to attend, and held forth on what all I saw at the Scene. Let me know your thoughts or questions.
Posted by INTERFACE 2037 at 21:54 No comments: When I can write about Carrie, in any of its forms, I do. Here I go long for the Scene about the new film and how it relates to previous tellings of the story. I will talk about Carrie to anybody, so if you're looking for a guest lecturer/podcast fill-in/auxiliary ranter, let me know...
Posted by INTERFACE 2037 at 21:51 No comments: 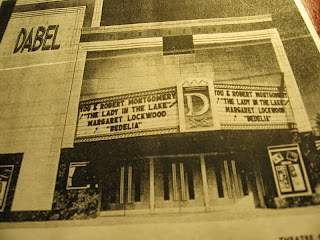 The image above is of Dayton's Dabel Cinema, a onetime Cinerama house and the largest theatre I ever regularly saw movies at. It was demolished in late 1992, which is lamentable to this very day. Next door to it was a weird/fun/seedy record store called Renaissance Music Media, and between the two places, I had many adventures in the Ohio summers I spent in my youth. But I use the image of the Dabel because 1) its lobby reminded me of the one in Night of the Comet, just bigger, and 2) whenever I get caught up in the fantasy of running a 24-hour movie marathon (actually, 24:22 according to my calculations), it's always here, in a 752-seat grand palace stuffed with memories.

Also, since it no longer exists, I've not had to see its star diminished by time, digital conversion, subdivision, or corporate malfeasance. So let's pretend, shall we, that here's where we'll be attending this marathon. Fifteen features, two shorts, and an excerpt that sets the thematic tone of the evening.


Events will kick off right around 8:00 PM (you know how the Eastern time zone is), and I hope you find this Halloween extravaganza rewarding and upsetting in the best possible fashion. Also, because the Dabel was a Cinerama house, there was a three-projector setup, meaning downtime between films could be kept to an absolute minimum.

The opening night film for this year's New York Film Festival was Captain Phillips, and as such, I was able to be part of the big press event with star Tom Hanks. Here's that. Sorry I didn't post this sooner, but I had a major tech failure while I was in New York in that a design flaw with the laptop I was using became an insurmountable crevasse.
Posted by INTERFACE 2037 at 01:00 No comments: