At the movies: Police, adjective. You might remember this from my New York Film Festival wrap-up, but if not, here's an in-depth piece thank to the Nashville Scene. Romanian cinema at its most intriguing.
Posted by INTERFACE 2037 at 17:55 No comments:

Weeping angels at the cemetary. At the movies: Black Dynamite. 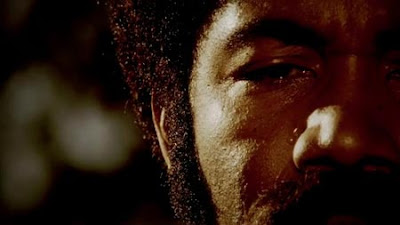 When Vietnam veteran and ex-CIA agent Black Dynamite (Michael Jai White)’s brother is killed by a phalanx of heroin-dealing criminals, it becomes open season on those who would exploit the black community through dealing drugs, attacking orphanages, chemical warfare, and kung fu treachery. But Black Dynamite is not alone in the struggle; he has his own fighting force of street pimps, karate hoes, and conscious militants to help bring down The Man and avenge the death of his brother.

A word-of-mouth smash at last year’s Sundance Film Festival, Black Dynamite has since hammered out a rocky road in its theatrical release- getting great audience response, but in a small, slowly-circulating release pattern. Not quite as weird as Pootie Tang, much truer to its inspiration than I’m Gonna Git You Sucka, Black Dynamite is nonetheless the first comedy must-see of this year for Nashvillians.

Black Dynamite is a delightful spoof of 70s blaxploitation films that manages to be clever, witty, and five times as politically audacious as much of today’s genre cinema. Perhaps it was its 70s setting or its willingness to slip the horseshoe of righteous anger inside the oversized novelty glove of comedy, but you’d have to go back to Spike Lee’s oft-maligned Bamboozled to find a film with this much horror in its heart about the exploitation of minority communities in this country.

Also, it has Captain Kangaroo Pimp and a musical sexual astrology sequence. Don’t miss it.
Posted by INTERFACE 2037 at 01:33 No comments:

At the movies: The Book of Eli.

The shame-spiral of Dead Presidents-American Pimp-From Hell weren't enough to stop The Hughes Brothers, who have returned to give the moviegoing public a desaturated, blood-splattered almost-Western about a dismemberin' loner (Denzel Washington) who protects the last Bible in the world. Gary Oldman wants it, and has several hundred henchmen to throw at Denzel to try and get that Bible, because it holds the key to rebuilding society after a horrifying cataclysm.

But here's the deal- the simple truth is that if you're looking for any sort of provocative statement about theology, society, or morality, you will find it sorely lacking. The film's actions are grounded deeply in Old Testament rhetoric about laying down vengeance and such, but at its center is the void.

I'm not surprised Denzel Washington took the part- he gets to be a stone cold badass fighting for decency and literacy in a postapocalyptic wasteland. He also gets to teach sexy women how to use high-power weaponry, then deploy some slice-and-dice-and-julienne skills to make the world safe for some righteous living. But The Book of Eli is both shameful and stupid (its one-two punch of an ending is a truly special kind of ridiculous), and gorehounds and evangelicals will both be horribly disappointed.

If the film had any sort of specificity to its theology, or even a willingness to bring some divine intervention into the picture, that would be one thing. But no.

Just more blood spilled in the name of religion by people who have no grasp of the material they're using to define their lives, and worse, the lives of others.
Posted by INTERFACE 2037 at 22:54 No comments:

Sometimes I like to talk about music. Usually in hopes that people will listen, but sometimes just to hierarchicize. With that in mind, here are my fifteen best remixes of 2009. Feel free to disagree, but you better have support for your theories- rational discourse in the house.
Posted by INTERFACE 2037 at 20:54 No comments:

In advance of his latest film, Werner Herzog's My Son, My Son, What Have Ye Done, I interviewed Michael Shannon for The Nashville Scene. Check it out. Let me know what you think.
Posted by INTERFACE 2037 at 01:09 1 comment: