Catching Up with Jason Shawhan.

I've been away from my website for awhile, and for that I bear a significant degree of shame. Here's what all I've been writing in the past few months.

An interview with Jack Pettibone Riccobono, director of the devastating and amazing documentary The Seventh Fire.

A review of the tragically underseen horror/SciFi film Morgan.

A review of the grotesquely nasty and surprisingly successful Don't Breathe.

A review of the new Ben-Hur, which is not what I expected. The best thing about it is the script, and that's not something I say very often about spectacles.

A review of Sausage Party, which is surprisingly subversive and affecting.

A review of Dressed to Kill, still infamous, still famous.

A profile on Bryan Ferry.

Not so much a review, but an assessment of Star Trek Beyond that also gets into the previous two films in the Kelvin timeline Trek films.

A review of Wiener-Dog wherein I get meta about the work of Todd Solondz.

A talk with comedian and impresario Seth Pomeroy about his new comedy endeavor.

A preview of the RuPaul's Drag Race Battle of The Seasons.
Posted by INTERFACE 2037 at 03:14 No comments:

At the movies: The Nice Guys.

The Trump vs Bernie Experience. 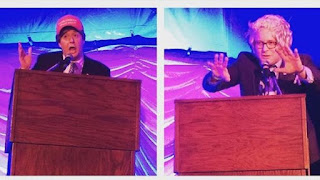 I got to talk to both sides of the Trump vs Bernie debate that's currently traveling the world. It was amazing across the board, and gets at a lot of the subtext of the modern American experience. I will go to the ends of the earth for James Adomian, and Tony Atamanuik kicks just as much ass.
Posted by INTERFACE 2037 at 01:31 No comments: 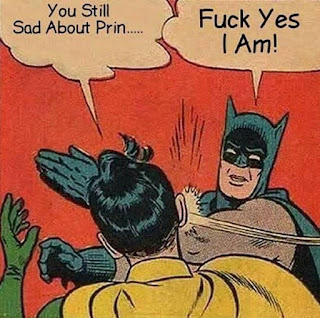 I still don't have my mind wrapped around having lost Prince. This piece that I wrote for Club Planet, well, I was able to do it because it had a specific focus on his ongoing gifts to the dance music community. I focused on the Linn LM-1 and drum machines in general. 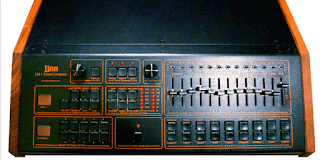 At the movies: Miles Ahead. 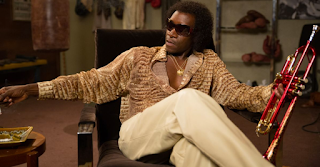 Miles Ahead is a bonkers biopic that delivers lots of madness and trippy joy, even if it sometimes gets a little silly. This is the first review I wrote after Jim died, so it may seem as if from an uncertain place. Because honestly it is.
Posted by INTERFACE 2037 at 01:23 No comments:

Further down. This is rumor control; here are the facts.

After the sudden and tragic loss of Jim Ridley, losing Prince was a subsequent devastating blow that knocked me for a loop. It all happened during the Nashville Film Festival, which under normal circumstances is my favorite week-and-a-half of the year. So it's been a messy past- almost two months.

The Festival went very well, even when carried out under the saddest of circumstances. For the roundup of the films I showed at the Graveyard Shift, check out the episode of The Whorer podcast devoted to it here if you'd like.

A few words about Jim Ridley.

I've started and restarted this probably about twenty times. Ironically, it's the sort of situation I would have eMailed or called Jim about.

I don't know how to qualify Jim Ridley in a way that does him justice. For almost the past twenty years, he's been my mentor and my friend, and my editor for the vast majority of them as well. But he was more than that.
A partner-in-crime in putting together the lineups for the Belcourt's Twelve Hours of Terror. A source of more confidence than I ever had in myself. And the best movie buddy anyone could ever have...
That time that Tilda Swinton touched my shoulder, Jim was who I called first.

Truthfully, neither of my parents have ever met anyone I ever dated, but Jim met three of them.

A few random tidbits of Ridleyana I cherish deeply:
Summarizing over the phone the Brian DePalma/Eamonn Bowles kerfuffle at the NYFF press conference for Redacted.
Our Sam Peckinpah sojourn, when we roadtripped to Atlanta with Zack Hall, for a pre-deadline screening of Prometheus, and back one Thursday night.
Having the Umbrellas of Cherbourg/Futurama discussion.
Opening night of Femme Fatale at the Green Hills 16, the most ecstatic moviegoing experience I ever had.
Those VHS tapes of the Alien3 workprint and The Ring.
The Cornetto Trilogy (see below). 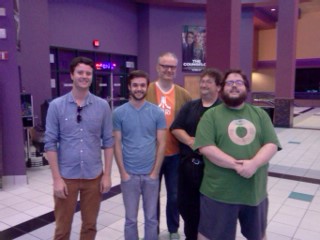 The post-Out 1 discussion at the 12 South Taproom, with old friends and new friends just tripping out on the mad possibilities of cinema.
Friday afternoons and Monday mornings, when we'd talk about whatever we'd seen over the weekend.
Any of the times we were on panels together for the news.
When my Grandmother was dying of Alzheimer's and we talked for an hour about Kore-eda's After Life.
His annual tradition of running through the aisles of the Belcourt during 12 Hours of Terror, gleefully pelting the audience with candy.

It's not an exaggeration when I say that I don't know how the city is going to get by without him. I really don't think a lot of businesses, collectives, cooperatives, bands, and teams in and around this town really realize how much work Jim did to fix the cracks and fissures that come from unresolved tension and anger.
He was like Santa Claus or Baretta, but with a specialty in crisis management and resolution. He had a superhuman ability to sense if you were in distress, and was always willing to perform a surgically precise intervention if he saw you cornered at some social event in an enervating conversation. He was a model of graciousness and sincerity when dealing with anybody, and I was and am in awe of it.

As an editor, he was the best kind of improv partner, “Yes and”ing a lot of borderline sweaty pitches that somehow yielded fruit. Seeing the same film in multiple formats, Eva Green saving otherwise crappy movies through sheer force of will and artful deployment of the groceries, an epic appreciation of Pootie Tang, a pair of Elm Street thinkpieces, a Laura Gemser-style investigative piece about why it was so difficult to see that last 3D Paranormal Activity movie.
He was both cheerleader and civic engineer, keeping you hyped and encouraged but also able to fix the foolishness that wasn't absolutely necessary.

I regret that we never went through with dressing as Statler and Waldorf for one of the 12 Hours events.

There was no feeling in the world like being able to show Jim something he'd never seen before; it was no easy task. He was a fountain of enthusiasm, and an amplifier for joy. He could make a bad movie bearable, and a good one great.

So how, in the end, do I qualify Jim Ridley? It's not just that he made me a better writer, because he did that with everybody. But I look at who I was back before that fateful VHS of the Sundance Cut of The Blair Witch Project brought Jim into my life as a friend and colleague, and I know he helped make me a better human being, and I miss him so much I don't even know how to put it in words.
So I guess I'll have to rely on a few lines from one of the greats; an artist who fueled a lot of the best conversations I ever had with Jim.

“Sometimes I wish that life was never ending/
But all good things, they say, never last/
And love, it isn't love until it's past.”

It's not quite the disaster you've heard, but it's got a disastrous last thirty or so minutes. Give a read.
Posted by INTERFACE 2037 at 17:39 No comments: 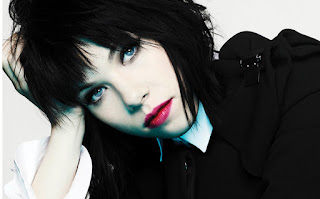 CRJ playing Nashville was exquisite. And I got to write the preshow article.
Posted by INTERFACE 2037 at 17:36 No comments:

Catching up with Jason Shawhan.

Greetings, and my unlimited love to y'all.

So there's several things going on, and let's just bullet point this and get a move on (I have to go get some CD-Rs, Orange Mango Pineapple juice, and an iridescent sharpie from my local 24-hour emporium of stuff).

1) I had an amazing conversation with Jonny Gowow for the Scene. He's got a show coming up this week, and an album called Wide Stance that is worth your time and dollar$.

2) The VVitch opened this weekend, and I reviewed it over at the Scene. I've been getting a lot of attention for this review, which is always a good feeling, and if you're thinking about going to see it, or if you already have and are looking for some discussion, give it a read.

3) The Belcourt Theatre is currently closed for renovations, but has an amazing array of offsite events for the whole city of Nashville. The theatre has been closed since December 25th of last year, and its absence is like a thousand papercuts every day. I never feel its absence more than around midnight on the weekends, because I miss hosting the midnight screenings more than anyone can possibly know.

4) The Agents of Fortune, the comedy extravaganza I've been writing for over the past fourteen months, had its last live episode performance tonight, and I'm completely bowled over by it. It was never easy, but I'm proud of it, and look forward to its next incarnation and events. Yes, I am part of its tasteful underwear calendar, because I believe in art, and it's very rare that you get a chance to pay tribute to Tono Stano in print.

5) I'm going to Los Angeles at the beginning of March to visit some friends, take photos of revered locations, have some adventures, and maybe a few meetings on the industry side of things. I love being creative and funny, and am a big fan of making a few dollar$ as such. If you're a reader in the L.A. area, say Hi and show me your favorite parts of the city.

6) This is rumor control; here are the facts. There is no 100% reliable test for EoA (early-onset Alzheimer's), and the options available are pretty expensive and not easy to come by before a certain age. So I'm taking that aspect of things slowly. Until I hear back from the government regarding my appeal on my tax credit situation, I'm not interested in pushing the insurance envelope. So I'm just trying to be observant over the next few months. Though if you, or anyone you know, are a neurologist, I'm very interested in participating in research involving EoA linked to damage caused by/as a symptom of Klippel-Feil Syndrome. So feel free to help do a signal boost on that end.

7) As always, you can listen to a bunch of my clubmixes on my Mixcloud page. There's thirty-five different mixes currently, ranging from twelve minutes to 2 1/2 hours. As well as the first eighteen episodes of my weekly mixshow, Erase; Rewind (that Facebook page also has the tracklistings for every episode, so if there's one you like that hasn't been set up for streaming on Mixcloud, you can submit a request and I will do so), minus those awful commercials. Please do give a listen.

If you're familiar with some of previous reviews of the films of Michael Bay, you might wonder why I ended up reviewing his new film, 13 Hours. The universe is an unpredictable place.
Posted by INTERFACE 2037 at 03:04 No comments: 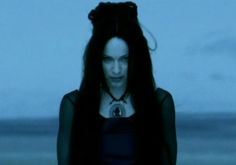